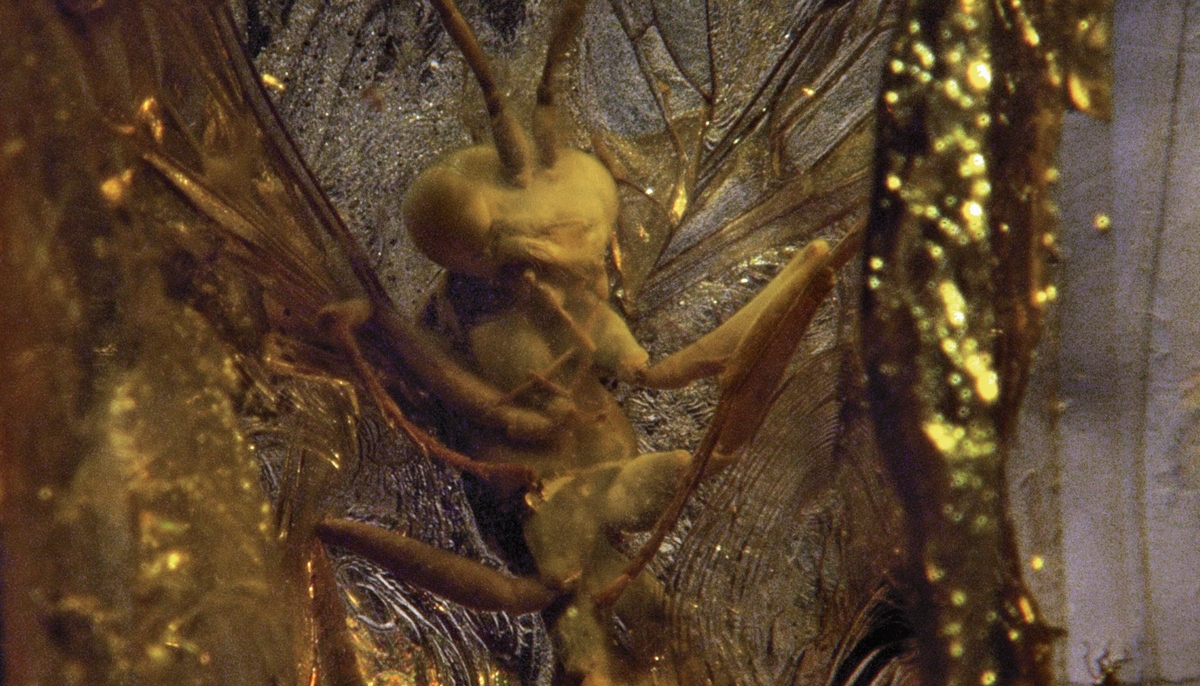 In 1963, Palanga Amber Museum was founded in the former mansion of Count Feliks Tyszkiewicz. It is the most significant museum in the Baltic region dedicated to amber, its history and artefacts made from it. The museum’s collection comprises more than 30,000 amber objects, of which over 15,000 contain inclusions of insects, spiders and plants that are now extinct.

The main part of the Palanga Amber Museum consists of a permanent collection and a chapel located in the right wing of the building dedicated to temporary exhibitions. The recently renewed Palanga Amber Museum aims to update its programme by showcasing important contemporary art projects in the chapel. As part of this programme the museum presents the one-work exhibition De-Extinction by internationally renowned French artist Pierre Huyghe. By focusing on an amber stone and insects caught in it millions of years ago, the work is directly related to the museum’s collection.

Born in Paris in 1962 and now based between New York and Santiago, Pierre Huyghe is one of the world’s most acclaimed contemporary artists. He began his career in the early 1980s, creating interdisciplinary works that questioned exhibition as a medium and rethought the possibilities and limits of collaboration, the relationship between an artwork and the viewer, the ways in which we talk and think about works of art, and how these operate in the art field. Huyghe has worked closely with important creators such as Liam Gillick, Dominique Gonzalez-Foerster, Douglas Gordon, Carsten Höller, Philippe Parreno and others. One of the most distinctive examples of his early work was conceived in 1995 as a response to an invitation to participate in an exhibition, for which he founded the Association des Temps Libérés, a legal organisation dedicated to cultivating unproductive time, reflecting on leisure, and imagining the possible development of a society without labour. To spread and promote its ideas, the Association has organised various public meetings, conferences and festive gatherings. Another outstanding example of Huyghe’s early practice is the work No Ghost Just a Shell created in 1999. Pierre Huyghe and Philippe Parreno bought the rights to a manga character, Annlee, from a Japanese agency specialising in the market. This character, a sign that doesn’t represent anything, was diverted from its initial function. The first two episodes, Two Minutes Out of Time by Pierre Huyghe and Anywhere Out of the World by Philippe Parreno, act as a prologue opening onto a series of films by various other authors. The project is built on a collective imagination and the work of each author gives life to the character extending the tradition of exquisite corpse initiated by the Surrealists. Later, drawing on the work of Pierre Huyghe and other related artists, renowned French critic Nicolas Bourriaud coined the concept of relational aesthetics.

Pierre Huyghe continued his artistic practice by experimenting with the latest technologies, various life forms and narratives of art history. In 2005, he created the film A Journey That Wasn’t based on his trip to Antarctica; in 2011, he realised the work Influenced, in which a person infected with the flu personally greeted each visitor to the exhibition; and in 2012, for the international exhibition dOCUMENTA (13), he situated a concrete figure in a city park’s composting area, and placed an uncultivated beehive on its head, while a white dog with one pink-painted front leg periodically appeared in the surroundings.

Huyghe’s works are conceived as scenarios, excesses of fiction and often present themselves as a form of continuity between a wide range of intelligent life forms, biological, technological and tangible inert matter that learn, modify and evolve. They are permeable, contingent and often indifferent to witnesses.

Palanga Amber Museum’s chapel hosts the artist’s work De-Extinction created in 2014. De-Extinction is a large-scale video work that navigates a piece of an amber, using macro and microscopic motion-control cameras portraying a situation frozen in time and an examination of insects caught mating millions of years ago. Slow panning close-up shots confuse the sense of scale as its soundtrack relays the whirring sounds of the camera. The artist’s examination of a material that is well-known and highly cherished by Lithuanians introduces previously undiscovered perspectives on amber and offers a reappraisal of the properties of fossilised resin. By returning to the origins of the world, the work acts as a memory for organisms and challenges the notion of death as disappearance.

Pierre Huyghe’s recent solo exhibitions include After UUmwelt, Luma Foundation, Arles (2021); UUmwelt, Serpentine Gallery, London (2018); The Roof Garden, Metropolitan Museum, New York (2015). Between 2012 and 2014, a major retrospective of Huyghe’s work travelled from the Centre Pompidou (France) to the Ludwig Museum (Germany) and Los Angeles County Museum of Art (US). He has been awarded the prestigious Nasher Sculpture Prize (2017), the Kurt Schwitters Prize (2015), the Roswitha Haftmann Prize (2013), the Smithsonian American Art Museum’s James Dicke Contemporary Artist Prize (2010), the Hugo Boss Prize at the Solomon R. Guggenheim Museum in New York (2002), and a special mention from the jury for the French National Pavilion at the Venice Biennale (2001).

The exhibition runs until 14 August 2022

Courtesy of the artist and Hauser & Wirth, London

Organiser: Palanga Art Museum, a branch of the Lithuanian National Museum of Art