Vilnius Picture Gallery / The Times and Works of Leon Bakst

The Times and Works of Leon Bakst 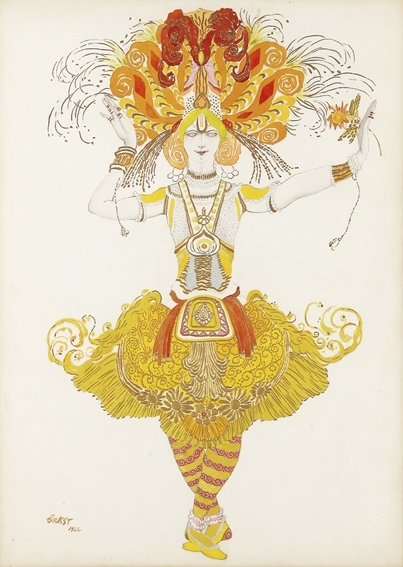 The last decades of the 19th century and the period before the First World War in Europe are called the Belle Époque. Léon Bakst, a painter, theatre designer and decorator, became one of the symbols of the Belle Époque.

Lev (known worldwide as Léon) Bakst was born in Hrodna (Grodno), on May 9 (April

27 in the Julian calendar). In official papers he was recorded as the Leib-Chaim Izrailevich Rosenberg. Later he took the pseudonym Bakst. In 1882, Bakst passed entrance exams at the Saint Petersburg Academy of Arts, and a year later he became an external student at the Academy. Four years at the Saint Petersburg Academy gave Bakst a solid foundation – he gained technical skills in drawing, perspective and oil painting.

In the spring of 1890, Bakst met with A. Benois, K. Somov, B. Nouvel and D. Filosofov, in what proved to be a critically important gathering of the future creators of the World of Art. The association World of Art emerged in1898 in Russia. Members of the association were united by a desire to revive the tradition of high artistic and refined professionalism in book and easel graphics, theatre set design, painting and applied forms of art on a new creative base. Bakst took an active part in the World of Art movement both as the head of the art department in the magazine and as the outstanding scenographer of S. Diaghilev’s Russian Seasons. Artists who were born in Belarusian and Lithuanian lands also participated either directly or indirectly in the movement: D. Stelletsky, F. Ruszczyc, G. Bobrovsky, K. Stabrowski, S. Zhukovsky, S. Sorin and M. K. Čiurlionis. The spiritual aura of the World of Art, its exhibiting, educating, and publishing activities, left a deep mark not only in Russian but also in world culture.

Bakst received international fame firstly as a theatre artist. Bakst’s world fame began in 1909 with the creation of sets and costumes for the dance ‘mimodrame’ in S. Diaghilev’s Russian Seasons in Paris. In parallel, the artist decorated performances in leading Parisian theatres, collaboratingwith theatres in London, Brussels, Rome, and New York. After the ballets Scheherazade and Firebird (1910), directed by choreographer M. Fokine “Paris was intoxicated by Bakst”. The success of the stagings marked the beginning of a new type of exposition – the display of costumes and scenery as independent works of art at exhibitions.

An outstanding artist and stage designer, Bakst also gained recognition as a fashion designer. Leaving for Paris in late spring 1924, Bakst enthusiastically planned on further expansion into the world of fashion, opening his own fashion house. However, the premature death of the artist on 27 December 1924 stopped all these plans in their tracks.

The 38th Session of UNESCO decided to mark the 150th anniversary of Bakst’s birth. This date has been included in UNESCO’s list of dates of commemoration for 2016. In 2016 the Belarusian bank Belgazprombank took the initiative to realise the international art project The Times and Works of Léon Bakst. The exhibition held at the Lithuanian Art Museum’s Vilnius Picture Gallery is one of the stages of this international project, which also covers exhibitions dedicated to Bakst’s work to be held in Minsk, Riga and his birthplace, Grodno. Participants in the project are the National Art Museum of the Republic of Belarus, the Latvian National Museum’s of Art Riga Bourse Art Museum, the Lithuanian Art Museum, the Martynas Mažvydas National Library of Lithuania, and the Lithuanian Theatre, Music and Cinema Museum. There are also works from the collections of Andrejus Balyko and Alexandre Vassiliev, Rolandas Valiūnas and Marius Jankauskas, and the Moscow gallery of Natalia Kournikova.

The Times and Works of Leon Bakst