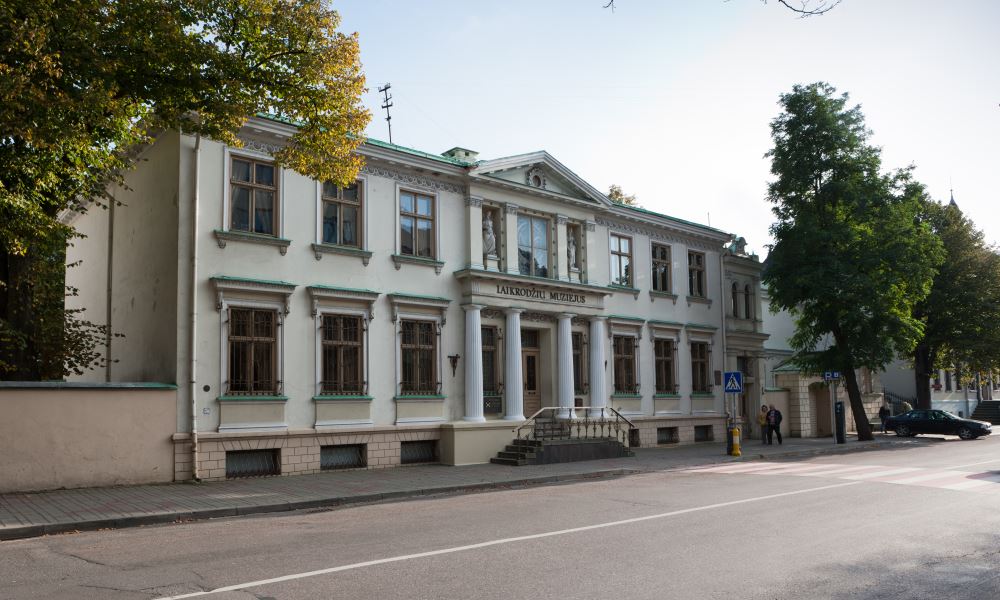 History of the Museum >

The museum is housed in the building of the late 18 th or early 19 th century.

In the second half of 18th century, the city traders and industrialists started to build their residences in the outskirts at that time (now in Liepu street). The owner of the first plot (Liepu str. 12) in 1768 was German financier Hoffman, who sold it to an English trader Johan Simpson in the end of 18th century. Long time nothing was built on the plot.
In 1820, J. Simpson built here a small residence (now it is the Clock Museum) according to the project of unknown English architect.
Since 1855 the house was transferred to a new owner–doctor of medicine Johan Mutray. The house belonged to them until 1872. There is no any information, who was the owner until 1913.
Since 1914, the house belonged to the banker Johan Hirschberger. At this time the house was reconstructed, the main building was extended. The banker together with his family lived there until 1924. On the second floor, there was established J. Hirschberger’s bank.
In 2003 J. Hirschberger’s grandchildren Mrs. Sabine and Mr. Robert Kochs, now living in Germany, with pleasure agreed to tell about that period. They also donated interior and exterior photographs of the years 1913–1924, which are now exhibited in the museum halls on the first floor.
In 1914, grandfather J. Hirschberger of Mrs. Sabine Koch with his family moved to Alexanderstrasse (now Liepu street). Mother Marianne of Mrs. Sabine was born there. There were eight children in this family: Johan, Katharina, Eva, Margaret, Georg, Gretel, Marianne and Hedda (twins). When Klaipeda region was connected to Lithuania the banker J. Hirschberger sold the house and moved to live to Germany.
In address directories, it is mentioned that in 1924–1929 the owner of the house was a factory director Jozef Kraus, who also was the president of Landtag chamber in Klaipeda.
In 1931 Lithuanian government transformed this house with the plot and founded the Land Bank. This bank had an objective to help Lithuanian peasants to get free of short-term credits. The bank supported not only peasants but also fishermans of Klaipeda region.
In 1935 the street was denominated as alley of the president of Lithuania A. Smetona.
In 1939 during annexation as the other Lithuanian institutions, the Land Bank was closed.
In 1940 ’The Alley of the President A. Smetona’ was denominated to the name of Adolphus Hitler.
Directories have records that in 1942 the building belonged to the “city community”. There was resident Mr. Doring registered.
In 1945 there was Pioneer House hounded.
In 1945 the street of “Adolphus Hitler” was denominated to the name of Russian writer M. Gorkij.
In 1984 in M. Gorkij street 12 there was the Clock Museum opened.
In 1988 the name of Liepu street was restored.

Park of Sundials
Next the museum building in the extended park part of 19th c. enclosed yard with functional sundials is seted out.
In the centre equatorial sundial of original construction stands and shows precise mean sun time of Klaipeda latitude.
The decorative Florence mosaic composition “The Way of the Sun through the Constellation” is seted upon the one wall of the park. On the other one the vertical sundial–decorative monumental composition “Time and Klaipeda” is seted. The accent of composition are figures of two angels, white and black, who symbolize the fight of good and evil, alternation of the light and dark, the Time. Composition is made by three-ply sgraffito technique.
On the horizontal sundial–decorative composition “Measure the Time with Your Shadow” the visitor of museum can measure the sun time himself by his own shadow.
In the both sides of the yard central stairs is sated a flower calendar. It is divided into twelve parts–twelve months, which come into bloom with full-colour blows in turn.