Exhibition "Józef Czechowicz and His Time in Photography"

The photography exhibition of the 1850s –1890s Józef Czechowicz and His Time in Photography opened on December 4 at 5 pm at the Vilnius Picture Gallery (Didžioji 4). The exhibition is organized in connection to the 200th birth anniversary of Józef Czechowicz (1818–1888), included on the calendar of  UNESCO memorable dates.

Born in 1818 in present day Belarus near Polotsk, Czechowicz graduated from a gymnasium in Vitebsk, set up his first photography studio in 1853 in Lublin, after 1856, he continued his studies of photography in Paris and Warsaw, from 1859 through 1864 worked as a photographer in Kyiv, Chernigov and Vitebsk, eventually settling in Vilnius in 1865. He spent the rest of his life in this town creating several hundred views of Vilnius and its environs, of significance to the past of Lithuania and the neighbouring countries. He recorded panoramas of Vilnius, its urban scenes, architectural and historical monuments, capturing the changes and events taking place in the town.

The exhibition starts with the prints by the first photographers who worked in Vilnius prior to Czechowicz’s arrival. Among them, are quite a few views of Vilnius from the Lithuanian cultural institutions and private collections previously never exhibited and unpublished. The viewers will be offered a pleasant surprise of seeing the earliest stereoscopic and panoramic pictures of Vilnius in an innovative way.

Crown jewels of the exhibition are prints by the French photography geniuses Édouard Baldus, Gustave Le Gray and the Bisson Frères studio, by the Varsovian photographers Karol Beyer, Konrand Brandel, Maksymilian Fajans and Jan Mieczkowski from the Lithuanian Art Museum and the National Museum in Warsaw.

The viewers are presented with key works from Czechowicz’s photographic legacy, best esteemed by the photographer and his contemporaries. The facsimiles of the earliest extant pictures of Kyiv and Vilnius are exhibited for the first time.

The exhibition brings to the fore yet another layer present in the city views by Czechowicz. The enlarged details of his pictures reveal the photographer’s contemporaries, witnesses of his times, with whom he walked the same streets and observed life going on in Vilnius.

The exhibition is accompanied by a catalogue.

The project is partially financed by the Lithuanian Council for Culture. 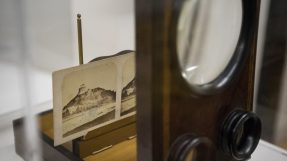