Museum of Applied Arts and Design / Exhibition "Aristocracy at the Helm of Fashion: 18th–21st Century" from the collection of Alexandre Vassiliev

Exhibition "Aristocracy at the Helm of Fashion: 18th–21st Century" from the collection of Alexandre Vassiliev

The exhibition „Aristocracy at the Helm of Fashion: 18th–21st Century“ is dedicated to the ages when the ruling class – the aristocracy – shaped the notion of fashion and influenced its development.

The first part of the exhibition is dedicated to the era of absolutism, which took root in France in the 18th century, and the Rococo style that was inseparable from the royal manor culture and catered to the personal needs of the first lady, Louis XV’s favourite, Madame de Pompadour. Visitors will be able to see how the Rococo style manifested through fashion trends of the day and observe the gradual changes in fabrics, dress designs and colour palettes, as well as the shapes of fans and other accessories: tobacco pouches, boxes, miniatures etc.

Marie Antoinette of the Habsburg family, wife of Lois XVI, was another leading figure in French fashion. She was an extravagant woman and influenced many new developments in clothing trends. She popularised Greek, American, English and Polonaise styles of dresses. One of the defining features of the time were ornate Marie Antoinette-style haircuts that could be up to a metre tall. Expressive portraits of the queen’s contemporaries illustrate how hard hairdressers used to work in the era of Marie Antoinette and showcase their art.

Another one of Marie Antoinette’s interests was gardening and farming. She had established her own ‘Scottish village’-type farm in Versailles and, inspired by the customs and taste for apparel of peasant women, she popularised aprons, mobcaps and canezous. Most accessories at the time became simpler and much more modest, especially compared to Rococo pieces. One can notice these changes in the exhibition by taking a closer look at fans, decorative belt hooks with chatelaines, handbags and shoes, as well as the so-called cocked, or folding hats.

Moving on, the exhibition presents the Napoleonic era – one of the key periods when the aristocracy had a particularly great influence on the world of fashion. Josephine, a Caribbean native from the Martinique island and wife to Napoleon I, the self-proclaimed emperor of France, had a keen interest in fashion. Her taste and needs were shaped by the old Versailles traditions as she had been married to the aristocrat Beauharnais before Napoleon. Josephine loved scarves and see-through dresses that emphasised her slender figure. The Empire style that formed during the Napoleonic period and imitated the fashion of ancient Greece and Rome, is represented in the exhibition by muslin dresses once worn by ladies of the royal manor along with various shawls, embroidered vests for men, velvet bracelets decorated with cameos, diadems, flat-soled shoes etc.

Napoleon being ousted marked the beginning of the Victorian era (1837–1901). It was characterised by a rather modest style of clothing. The queen was very fond of Scotland and her summer residence – the Balmoral Castle, which had its interior draped in plaid. No wonder that plaid crinoline dresses became popular in the 19th century, inspired by the personal preferences of queen Victoria.

Another important fashion figure at the time in France was Eugénie de Montijo, the Spanish-born wife of Emperor Napoleon III. After becoming the client of the first-ever fashion designer, Charles Frederick Worth from England, she became a high fashion icon. Crinoline ballroom dresses stood out because of their girth, sophisticated cuts, originality and beautiful decorations such as black Chantilly lace. The development of capitalism in European countries meant that the aristocracy was being pushed out by bankers and industrialists, whose tastes where embodied by gold-plated furniture and artificial luxury – fake diamonds and gold. Catering to the needs of the aristocracy at the time were the most famous fashion houses: Worth, Redfern and Ping.

Expanding railways encouraged travelling and members of the aristocracy would often bring back expensive souvenirs from their travels – Roman, Venetian and Florentine mosaics, bead embroideries and lace.

The next part of the exhibition is dedicated to the clothing of German and Austro-Hungarian Empires. In the second part of the 19th century in the German Empire, militaristic clothing elements were particularly popular: metal buttons and pieces of military or hunting apparel, while in the Austro-Hungarian Empire a bolder style of clothing was preferred, as it was influenced by the Eastern European nations that were part of the empire. This included Romania, present-day Czechia and Slovakia, and the countries that comprised Yugoslavia. Particular attention should be given to elements of the hussar style: tassels and ropes that used to adorn clothes worn when going for a stroll.

A special part of the display is dedicated to the Russian Empire, which also included Lithuania. Visitors will be able to see how people close to the Romanov royal family used to dress. One of the stand-out items is a rotunda cape designed by the Brizak fashion house that used to belong to the Empress Alexandra Feodorovna, wife of Nicholas II.

On the subject of influence on global fashion had by Russian aristocracy, the consequences of the 1917 revolution must be also be considered. Having lost their wealth and homes due to the civil war, members of the Russian nobility were forced to run from the country. In order to establish themselves in new emigrant hubs – Constantinople, Berlin, Prague and Paris, the aristocrats began designing fashion. This was how numerous fashion houses were founded in Paris by Russian emigrants: the Kitmir house of embroidery by the Grand Duchess Maria Pavlovna Romanova, fashion house Irfe by Duchess Irina Romanova and Duke Felix Yusupov, fashion house TAO by Maria Annenkova and Princess Lyubov Obolenksaya, fashion house Paul Caret by Princess Ekaterina Lobanova-Rostovskaya, Yteb house of design by Baroness Hoyningen-Huene, Empress Alexandra Feodorovna’s lady-in-waiting, and others. This exhibition will be the first time many of the examples of clothing made by these famous fashion houses are on display.

One can learn a lot about the role of twentieth-century English aristocrats in the world of fashion from Wallis Simpson, one of the most renowned fashion icons. W. Simpson stood out from conservative English women with her charming behaviour and her apparel, which showed a unique sense of style; meanwhile King Edward VII even had to renounce his throne because of her. The exhibition features a dress from W. Simpson’s wardrobe, as well as dresses worn by English aristocrats when the throne was inherited by Queen Elizabeth II.

Part of the display is dedicated to Lithuanian aristocracy, which also played a role in designing global fashion. First and foremost, the American Lee Radziwill, sister of Jacqueline Kennedy, who married a famous Lithuanian duke and became a fashion icon in the United States. The exhibition features Lee Radziwill-style dresses as well as clothes designed by the fashion house of Duchess Irene Galitzine, a direct descendant of the Golitsyn family or the Russian Gediminids.

Finally, visitors at the exhibition Aristocracy at the Helm of Fashion: 18th–21st Century will have the opportunity to see examples of clothes created by designers from famous old families. This includes the Florentine nobleman Emilio Pucci, the American count of Russian-Italian descent Oleg Cassini, Marquis Jean-Charles de Castelbajac and Marquise Jacqueline de Ribes from France and others. These unique pieces remind us how the aristocrats used their names and exquisite taste to give global fashion a new creative impulse, which also helped noble families to maintain a decent living in the 20th century. 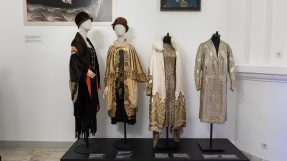 Aristocracy at the Helm of Fashion: 18th–21st Century